Luang Phor Phu Suang, We have a combined 80 years of experienced Masters who explain and help us to translate the Sak Thai Kata Yant designs. The simplest explanation we find is the best answer. 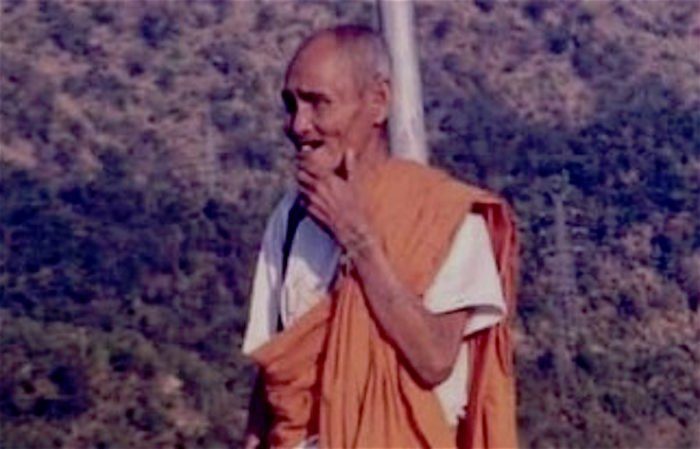 Thai Buddha Amulet Monk Luang Phor Phu Suang is a monk who is reputed to be five hundred years old. He is also known by the name of Taewada Len Din, the Angel who plays on the Earth. He is one of the  Thai Ariya Sangha, the high sangha of Thailand. He is well known for suddenly appearing out of nowhere or suddenly walking out of the jungle, followed by hundreds of animals and birds.

He is famous for his Kong Grapan amulets, ones that are reputed to bring invincibility, protection from danger, and protection from evil to the owner of them. When the amulet is reversed it can be used to communicate directly with LP Suang and to ask him for help. The amulets were all blessed for three days and three nights before being stored away for many years. They were later taken to Wat  Suthat temple in Bangkok for the final blessings before being used.

The first amulets produced by LP Suang were known as Pim amulets and they often take his name of Taewada Len Din, the angel who walked the Earth. He is said to be five hundred years old and many generations of village families swear he was an old man when they were a child. They recall him living in an old shed in the middle of the rice fields at Sri Saket for as long as they remember.

The magical power of his amulets is said to vary according to how long you make devotion to them and him. One week gets you Metta Mahaniyom- attractiveness and charm. Two weeks’ of devotion will earn you  Choke Laap- wealth and success, but Three weeks will bless you with Siang Choke, luck in gambling, and protection from death in road accidents. All his amulets are said to contain Kong Grapan Chadtri’s protective powers and there are many reports of miracles that have taken place, supernatural events, and strange coincidences around the amulets and their owners. The amulets are also said to have the power to ward off Black magic attacks, demons, evil spirits, lightning, fires, and accidents.

L P Rit claimed to have known LP Suang for many years, and that LP Suang had looked like an old man all the time he had known him and had never changed. When LP Rit was building the Dhamma Sala he said that LP Suang suddenly walked out of the jungle, followed by numerous birds and animals, he walked across the flooded field in the monsoon rains towards the temple, then turned around and suddenly disappeared.

LP Rit said that the first time he had ever met LP Suang was when he himself was a young man. He had asked the old monk how old he was, and the old monk had replied that he had already forgotten the past and that he was not the legendary old monk they thought he was. He told LP Rit how important it was to live in the now and not the past. Historic Buddhist teaching is well known.

LP Suang was well known amongst the villagers for enjoying simple pleasures. At the side of his old hut in the rice fields was a kite that belonged to LP Suang. If the day was windy the villagers would join him and fly their own kites, with LP Suang laughing and clapping at the antics of the kites. If his kite was ever missing from outside the villagers knew that LP Suang was not home. They never saw him leave on his outings, they believed that he flew off across the sky with his kite during the darkness of night.

LP Suang was often invited to watch the cockfights that the villagers staged. He would sit and laugh and cheer on his favorite fighting cockerel. Many of his devotees would ask him to give them lucky lottery numbers. When he gave them winning numbers they would bring him a share of the money, but he would throw it into the flooded field and make it disappear or ask for a ride in their car then throw the winnings through the window to the poor.

New needles every time and ink imported from the USA. We are one of the cleanest studios in the world. The Studio is certified to the highest hygiene by the government. Inspected and licensed to operate a tattoo studio. All artists/masters are tested every year for blood diseases. We are as good as western standards or better.