Sak Yant Thai Tattoo Introduction. Reading these descriptions and examples of white magic will help in a better understanding of Sank Yant Magical art of sacred designs and amulets, etc

Muay Thai has also played a major role in taking Sak Yant to the eyes of the world as many Muay Thai fighters bear protective Yants on their bodies. There are Muay Thai boxing camps in every major city in mainland Europe as well as the U.S.A. Sak Yant is embedded in Muay Thai culture and they are both a real part of Thainess. 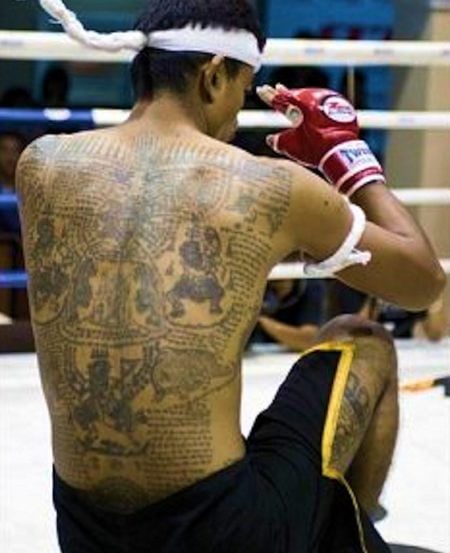 Thai Sacred Tattoo Studio has been involved in the sacred art of Sak Yant for more than twelve years. Beginning with one man’s fascination with this ancient art of tattooing, Thai Sacred Tattoo Studio was born and as it developed, so did the involvement in Sak Yant. Martin Kendall, the founder of Thai Sacred Tattoo Studio and Bangkok Ink Tattoo Studio, spent many years learning the ways of Sak Yant and more importantly, the Ruesi and Ajarn Masters. It was not easy to gain the trust of the Sak Yant masters that he works with. So Martin spent time with them and learned a lot about the history and origins of this spiritual practice. Now we have been working with Ajarn Noo Ganpai, Ajarn Ohr, and Ajarn Bpom for the last 10 years or more and we are honored to be a part of this Thai tradition and proud to facilitate the dreams of many foreigners who have researched Sak Yant. We offer a V.I.P service, which you can read more here. Once we have been contacted by email the team will answer your questions and arrange everything. After the appointment is confirmed, the experience starts with a smooth car ride from your hotel, to the Sam Nak, tattoo temple of the Master they have selected. Once there, we translate and discuss with the Master about various Yants. He answers any questions you might have. When the Tattoo has finished and the blessing, offering ceremony is over, we take them back to the hotel. We take pictures of the entire process and mail them the next day. In a year alone we do help hundreds of people who had one common goal, they all wanted a Sak Yant experience with a genuine Ruesi Sak Yant Master.

A Ruesi is a very special person. It is important to understand what a Ruesi is if you really wish to know and understand Sak Yant. Our website will help to explain this. The origins and different roles and levels of the Ruesi as well as the detailed explanations for the Yants we have selected. Initially, we will focus on the culture of Sak Yant and its place within the Thai community. We will talk about the Yant itself and then move on to individual Yants and their application.

Selecting a suitable Yant is important. There are literally thousands of Yants, with all kinds of uses from making the baby sleep at night to keeping unwanted spirits at bay.

Here are some examples of what Yants are used for:

Yants can broadly be split into the following groups:

Maha Jong Ngan: To stun others into defeat or submission.

Yants
Sak Yant Thai Tattoo Introduction, What exactly is a Yant? Well according to research, a Yant is a sacred geometric design that includes ancient scriptures that are said to invoke spiritual and magical powers. Yants were in existence long before being tattooed on the skin, often they would be scribed onto a piece of cloth (Pha Yant) and displayed in the home, or rolled up in a small glass tube (Takrut) and worn around the neck. Another popular method of bearing a Yant was to wear a shirt with the Yant inscribed, soldiers favored this and went into battle wearing Yant vests (Seu Yant). Yant is the Thai word for Yantra, a Sanskrit word meaning. A Yantra can be many things and one is a geometrical shape that possesses magical powers. The word “Sak” in Thai, means “to tap”, so Sak Yant, in Thai, means to tap out a Yant. A yant is also a chant, a magical sacred chant. or hand-poked tattoo as it is often referred to. There are literally thousands of Yants, Ajarn Noo Ganpai published a book entitled, “Ten thousand Yants” that illustrates the diversity that has taken place over the years. Each Sak Yant Master has created or adapted his own version of a particular Yant and thus created a new one. It should be noted that some Yants are not suitable to be tattooed on the bearer. It may be that the desired outcome is one specific thing and not something you would want to wear for all your life. Many Yants are inscribed onto thin copper strips then rolled up and slipped into a small glass tube which can be worn around the neck. This is called a Takrut.

There are many various shapes of Yants. A circular, round Yant indicates the face of Lord Buddha. This originates from Brahminism. A four-sided or square Yant signifies the four elements, earth, wind, fire, and water. A three-sided or triangular Yant means Buddha, Dhamma, and Sangha. Some Yants are of pictures and they represent various mythical figures and animal types.
The Ong Phra (Buddha’s body) (องค์พระ) is a symbol of Lord Buddha and is seen frequently in Yants. This is usually a series of oval shapes arranged on top of one another, ranging from large to small. It forms the basis of many sacred Yants. A crescent or half-moon shape indicates the illumination of darkness as we make our way through this life. A small round shape symbolizes the Sun that lights up our way ahead. If the circle is above the main Yant then this means the stars in the sky and indeed all celestial beings. This is common in many pictorial Yants.

The ever-decreasing spirals as in Gao Yod (nine spirals) (เก้ายอด) signify the wavering that this earthly life bestows upon us. At the top, when the line goes straight up signifies that the person has attained control over these earthly desires and attachments and is ready to enter Nirvana or true enlightenment. This symbol is called an Unnalome and the central spire represents Buddha himself.