Luang Phor Tiang and his Amulets 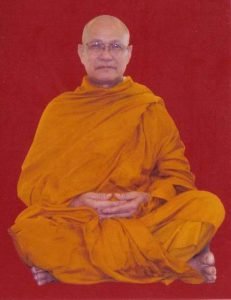 Thai Amulet Monk Luang Phor Tiang was born Boontiang Poo Yim in 1936 in Korat. He became a novice at the age of 14 and was a monk at Wat Rakhang for over fifty years under the abbot named Luang Poo Moon.

Wat Rakhang was an old temple from the Ayuthaya Kingdom period. King Tangsin of Thonburi used to go there to meditate and the library was constructed by King Rama the first.

He traveled from Korat to Ayutha, then to Bangkok to study Buddhist disciplines, Dharma, and Pali languages. After that, he traveled back to Korat to complete his studies. He enjoyed the simple life of the forest temples, with their closeness to nature. He was a third-generation disciple of the lineage of L P Ngern and also a disciple of Luang Pin Hin at Wat Rakhang Chao Koon Tiang. He practiced chanting and meditation techniques until he was able to communicate with Luang Poo Toh through mind power during dreams and meditation time.

Luang Phor Tiang often described the magical and spiritual meetings with Luang Poo Toh and told about being in a wonderful forest with him the first time it happened. They had looked at plants during that first mind meeting, then Luang Poo Toh had disappeared. He described waking, as if from a lucid dream. After this experience, he found he could communicate many times with Luang Poo Toh and said that Toh had given him many suggestions to help with his work and that Toh had helped him escape from difficult situations many times.

He believed that L P Toh had visited him one evening and simply sat quietly on his bed. He thought it might be to warn him of something but he was not certain. Later that day he was out in his car with his driver, when suddenly one of the wheels of the car came off at high speed. The driver managed to bring the car under control and brought it to a safe stop. L P  Tiang attributed their good fortune to the help and protection of L P Toh.

Another time the car he was traveling in went out of control and turned over and over. On the fourth roll, he recited a prayer to L P Toh and called upon him to help them as he thought they would die. The car stopped rolling over and landed safely on all four wheels.

Luang Phor Tiang always carried an old black and white photograph of L P Toh teaching with him. One day he got someone to add some colors to the photograph. That night L P Toh appeared to him and asked him why his robe was now colored in red, as he had liked it as it was. Many followers believe that their prayers to him will still be heard if they pray to the photographs, as his magic is still inside them.

The residence of L P Tiang had many statues of L P Toh in the area around it. L P Tiang’s sculptor had a dream that L P Toh came to him and asked for a shelter to be built to protect him from the rain and sun. L P Tiang ordered one to be built immediately to protect the statue.

L P Tiang made many images of L P Toh for  Thailand and abroad. He also issued many chants and good blessings for his followers to use over the years.

His knowledge of herbal medicine and ancient Thai plants was highly specialized. He was an expert on the important ingredients of potions, oils, and sacred amulets and knew exactly where to pick the best plants and where so they held their power. Luang Phor Doe taught him this ancient knowledge of how to collect, prepare, and use herbs and plants for magical purposes. L P Tiang often supplied them to  Luang Phor Tim for use in amulets, and they soon became lifelong friends. L P Tiang was offered the position of abbot at  Wat Nong Yang, but he went instead to Wat Sam Nak Kham. It was later rumored that a batch of L P Tim’s amulets were hidden beneath the main Buddha statue at  Wat Sam Nak Kham.

L P Tiang’s amulets are highly prized by collectors and his followers as they are reputed to hold a great deal of magical and spiritual power and they are only produced in small numbers.