Luang Phor Ngern and his Amulets 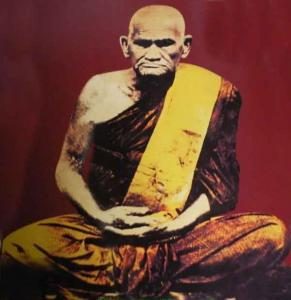 Thai Buddha Amulet Monk Luang Phor Ngern was one of the ten most highly respected and revered monks in Thailand. He was born in 1808 (2351) in Bangklon, Pichit Province in Thailand. His name, Ngern, means silver or money in Thai. He came from a family that was comfortably well off

At the age of twelve, he became a student of Luang Pu Suk at Wat Pak Klong Makamtao. He furthered his education at Wat Tong Pu, now Wat Chanasongkram in Bangkok, and he was ordained when he was twenty years old.  At the age of 25, he decided to return to his village. He stayed at Wat Kongkaramin in Pijit province where he also practiced Tudong (spiritual journeying) but he found it difficult to practice there and left. On leaving the temple, he prayed to the Buddha and took three bodhi tree saplings from the main temple entrance. He planted them in Wangtago village and promised to return and build a temple if they thrived. So it was that Wat Hirunyaram came to be built by him in Bangklon.

It is accepted by many that Luan Phor Ngern attained an Aharatship and used his telepathic powers  (Abinha) to communicate over very long distances with other monks. They developed this power through meditation as taught by the Buddha.

The businessman took the container of water from the temple and tried to pour it away into the river, but the container would not empty and remain full. This is one of many stories describing the magical powers of Luang Phor Ngern.

In 2452, the Supreme Patriarch Somdej Phra Sangkaarat Kay in Nakhon Pathom province summoned all temples to send their representatives with high magic and mental powers to participate in a meeting for exchange of knowledge and a test of their minds and magical powers. This was known as a test of Ultra Dhamma. Hundreds of monks attended the meeting, which lasted for three days and three nights at Wat Phra Pathom Chedi.

The test challenged the monks to move a wooden plank from one place to another and then back again to the original place. Many of the monks managed to move the planks, but only ten of them managed to place it back in its original place. Luang Phor Ngern got fifth place in the test.

Luang Phor Ngern’s magical and spiritual powers are well known, particularly to people near the area of the Chao Phaya River. He provided help to those who needed it and was involved in the building of many temples.

Luang Phor Ngern made many amulets and talismans throughout his lifetime including Roop Lor, which is a favorite among Thai businessmen. It increases financial and business success and protects against danger. The Loi Ong is a seated figure of the Buddha, which was made by a smelted metal compound being poured into a two-part metal mold. The Rian Phim Jop is usually a triangular-shaped amulet made of compound metals.

The small statues and amulets possessed spiritual energy suited to increasing the owner’s charms and bosting loving kindness. They also bring good luck and prosperity, enable escape from danger, and protect the wearer or owner of the talisman. The early ones contained many metals but are sought after because of the magical blue metal used in them. This is believed to be Lek Namphi, which was an ancient blue metal used in the making of swords for warriors.

Amulets and talisman of his design are still made by temples years after his death. They are considered to be just as powerful and spiritual as the ones he made during his lifetime, although collectors tend to prefer the originals. These can be worth enormous sums of money if authentic.

Many temples produced special editions of the amulets, especially Wat Bangklang. Amulets found in Kru Chedi in Wat Watango show that Luang Phor Ngern also made amulets out of clay and other organic materials. They were also found in Kru Wat Wang Jit in Pitchit province in 2013.

New post-death-produced talismans are consecrated by many monks chanting – often as many as 108 monks. A special batch of amulets was produced by Wat Huay Khen to celebrate the 100th anniversary of the temple, and these were known as Roon 100 Pee Phim Niyam. For an amulet in the style of Luang Phor Ngern to be sanctified and infused with magical power, mass chanting by many monks is necessary. All invited monks must have high attainment in magic and mind power in order to invoke the magical power into the amulets with the utmost respect to the founder Luang Phor Ngern. Many new amulets bear his image and it is believed that once properly infused and sanctified they can bring great success to the wearer.

In 1972 a posthumous batch of amulets was made which are nicknamed the Broken Gun Amulets. (Bpern Dek). The Thai government sent many soldiers to the Vietnam war to help the United States of America. One such soldier, Sergeant Chao, was almost killed when a box of weapons he was clearing from the battle site exploded. He saw the powder ignite on the floor and threw the box away at the last minute. He was unharmed, even though the explosion was all around him. He believed the amulet he had been wearing protected him from certain death. To test his theory, someone decided to fire a gun repeatedly at the amulet. The bullets were deflected from the amulet by an unseen force and eventually, the gun misfired, damaging both the gun and the hand of the person firing it.

In 1985 someone decided to make a new edition of the amulet. The metal refused to be smelted and many believed it was because it contained some of the old original amulets of Luang Phor Ngern. A special prayer was offered to Luang Phor Ngern, and the metal smelted so it could be made into new amulets.

In recent years a special batch of the amulet has been produced to boost morale in Thai soldiers on duty in the volatile Southernmost provinces of Thailand. This is known as the Setti Ngern Lan batch. Proceeds from the donations for the amulets are being used to rebuild ruined temples and to provide educational scholarships for poor students in the south.

Well known in almost all Thai households and even across Singapore and Malaysia, is the Roon Kong Toon 53 batch. They were blessed at Wat Bangklan by 108 Kaeji monks from Pritchit province. Within one year the batch had become an all-time classic much sought after by collectors and much loved by Thai people. They were made in a sacred ceremony where the smelted metal was poured into the molds in the temple itself. They were made of many types of metal including old bronze, copper, silver, gold, sacred incantation scrolls, and earth.

In 2553 twenty-five different types of Pim amulets were found in ancient clay pots at Wat Khao Pra Dtai during a dig. They were buried under the pillars of the temple salon. It was presumed that they had been buried there to protect the temple when Luang Phor Ngern attended the inauguration.

Most of the amulets that had been buried were badly damaged. Only one-third of them were made of metal compounds. The rest were made of sacred powder and clay. Some of the metal ones had a golden coating called Wet Gold, which is no longer used in modern amulets. They were also found under the main statue of the Buddha and at the foot of each foundation of the temple. It is believed he ordered them to be placed there to bring blessings and protection to the temple.