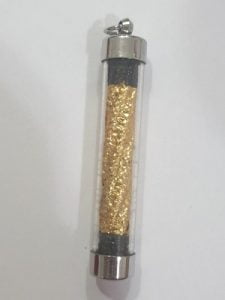 Thai Amulets or Takruts are like good luck charms. There are many amulets for different purposes, such as those to offer protection, attraction of riches, good health or for things like help with confidence or making speeches etc.

The amulets and takruts can be made from many different materials. While an amulet is being created white magic chants are performed to infuse the charm with that particular effect. This should be taken seriously, in order to help people make changes to their lives or the lives of those around them.

Amulets and takruts do not have any physical magic, as some people suggest. This is often suggested just to make more profit from the amulets. Buddhism, Sak Yant sacred tattoos, yants, amulets and takrut are tools to help you get what you want from life. You cannot buy an amulet, takrut or have a sak yant tattoo done and just sit back and wait for things to change in your life. You have to think positively and change the way you look at life. Aim to live a good life, do good, then things will happen to make your life better. You will be surprised how quickly things can change but you will need power and commitment to do it.
Thai amulets started out as small tablets which had good luck scripts and chants engraved onto them. They were bartered, fair traded or given out as gifts. Today, the amulets are blessed by a monk or a Sak Yant Master and used as a blessed Buddhist item to attract good luck, good fortune or protection etc. They are also given away to disciples and people who practice Buddhism. They are used as a reward by the temples and monks and it is amazing how much Thai people give. But after all, its about giving and receiving in life, it is Karma.

They are usually in some form of tube or cover and this cover can sometimes be filled with oil or other liquid. The scroll itself can be made from metals such as lead, copper, silver, or gold. They can also be made of bamboo, wood, leaves, animal skin, bone, or paper.

Thai Takrut, are usually on a cord or thong and are worn around the neck or waist. Monks often wear them under their robes. They can be worn at the same time as amulets as there is no conflict between the two. More than one Thai Takrut can be worn in order to increase power or multiply the blessings given by them.

Thai Takrut scrolls contain sacred magical inscriptions derived from Buddhist, Animist, Vedic, and Khmer traditions. They are made with great care by the monks and Master Ajarns, who chant magical incantations whilst making the Thai Takrut. The sacred magical inscriptions often contain symbols from sacred geometry and symbols known only to the monk and Masters who created them. Inscriptions are highly individual and the Thai Takrut are often infused with magical oils and powders.

Thai Takrut is a yantra, just like a Sak Yant sacred temple tattoo. Yants are made up of sacred geometry and magical script according to their purpose. Incantations, Buddhist and Pali prayers are recited and the spell is written in an ancient form of Pali which resembles Khmer script. In the North of Thailand, they tend to use the Lanna script rather than the Pali/Khmer that is used in the rest of Thailand.

Years ago, Luang Phor Koon of Wat Ban Rai inserted tiny pure gold Thai Takrut into the bodies of thousands of followers and visitors to the temple. They were named Thong Kam. Gold and silver Thai Takruts were said to have the power to repel evil and black magic and other dangers.

As well as the scrolls within tubes, Thai Takrut can also take the form of a belt, a ring, or an armband. They can be worn or carried close to a certain part of the body to give more power or protection to that part of the body. Some Thai Takrut is made small enough to hold in the mouth and these are said to enable the power of someone; speech to be enhanced. These are called Salikas the golden-tongued bird. Some Thai Takrut is shaped like bullet cases and these are reputed to protect the wearer from danger and injury. There are many stories told about the protection and blessings they have given to people.

Thai Takrut is made by the monk who chants a Kata, or mantra, to empower the object with the blessings he wishes it to carry. It is said that if you are in danger you should think of the monk who created the Takrut and pray to ask for his help with the situation. Of course, the power of the Takrut also depends on the motives of the owner. If you are evil the Takrut will not protect you or bring you blessings. It is all about the Karma.

New needles every time and ink imported from the USA. We are one of the cleanest studios in the world. The Studio is certified to the highest hygiene by the government. Inspected and licensed to operate a tattoo studio. All artists/masters are tested every year for blood diseases. We are as good as western standards or better.