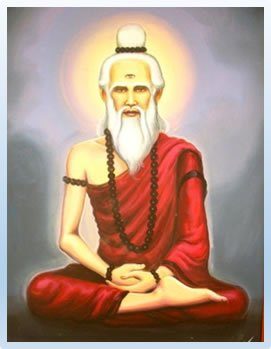 Ruesi-Lersi-Hermit Sage-Pra Rasi-Rishi. In order to understand Sak Yant, one must understand the Ruesi and his role. The Ruesi was originally an ancient soothsayer or medicine man. They date back to pre-Buddha in the Brahmist times and were said to possess the ability to talk to the gods. They were said to have many other abilities such as leaving their body, foreseeing the future, healing with forest plants, talking with animals, and practiced some forms of alchemy. There are some mentions in ancient Buddhist scriptures that the Lord Buddha was in fact a Ruesi, of the highest level before he realized that it would not take him to Nirvana.

The Ruesi was mostly secluded from the general population, living deep in the forests, spending their time in deep meditation or making potions to cure.

Ailments. In order to develop themselves spiritually, they punished themselves both physically and mentally, to the point where they developed higher spiritual powers. It is believed that the Ruesi compiled the Sacred Vedas of the Hindu religion and it is these Vedas which the Brahmist (In Thai Brahm) religion holds as the basis of all knowledge. At that time, Brahminism was the main religion of an area that included India and Nepal. The knowledge within the Sacred Vedas was exclusive to the Ruesi and they transformed that knowledge and power by inscribing Yantras, sacred designs that could tap into hidden powers. At this time Yantras came in the form of a piece of cloth or even a shirt, to be worn to give protection. They were kept at home to ward off unwanted spirits. These Yants (sacred geometrical designs) were incorporated into the Khmer culture and subsequent cultures as Siam was formed and then what is now known as Cambodia, Vietnam, and Laos.

There are four main types of Ruesi:

At the lowest level, they conform to the laws of nature and do not really possess any supernatural powers however they have embarked on a journey to the highest level. It is at this level the Ruesi’s mind is opened and he sees something for the first time.

This type of Ruesi is much more developed than the Racha Ruesi and is able to meditate for hours on end. He is competent in natural healing powers.

He possesses strong spiritual powers and sticks religiously to his vows. This Ruesi can leave his body and is able to do many things.

This level is the highest. Apart from having all of the above, he is incredibly intelligent and has managed to detach himself from all forms of attachment. His magic spells are very potent.

These four types can be subdivided into eight, they are:

This Ruesi is morally sound with a high level of kindness and compassion. A person deeply connected with the earthly elements and he likes to live in caves in the mountains or other equally remote areas.

This Ruesi will wander in the forest, developing himself by enduring many hardships. He attains a very high level of psychic development in his constant search for higher spiritual guidance.

This Ruesi has magical abilities, attaining a high level of intellect and wisdom through serious study and practice.

This Ruesi is one who constantly strives to rid himself of the attachments and the self. He will torture himself in many ways to rise above the physical level of existence, aiming to reach the level of enlightenment by purging himself from earthly desires.

This Ruesi is a wanderer, often with matted hair tied up in a bun, unshaven and dirty. He will wander the forest making potions and pastes to heal the sick.

This variety of Ruesi is very strict to follow his code of righteousness. He is very intelligent and filled with goodness, his compassion for others shines through. Their aim is to help those poor and underprivileged people he meets. He will always be trying to help someone rid themselves of suffering and he likes to live in wide-open areas like the plains or perhaps a dessert.

This Ruesi is very secretive, he follows a rigid code of living, staying mainly in mountain areas. He makes potions to cure ailments.

This Ruesi is a Brahman that sees his role as a helper to all who need it. They used to be called upon to perform many ceremonies and would come and stay for the duration, refusing any offer of payment. They followed a code of physical and mental practices to enable them to stay at the high spiritual level they have attained during their long journey.
A Ruesi must pass through all of these stages if he is to become truly enlightened. This may take hundreds of lives or reincarnations. It is at this point I must talk about Buddhist monks and Sak Yant as there is much confusion over this. Many people mistakenly believe that only a Buddhist monk can perform Sak Yant. In fact, there are three groups of people who can perform Sak Yant.