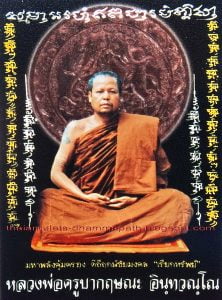 Thai Buddha Amulet Monk Luang Phor Kruba Krissana was born the ninth child out of a family of ten children on 1st August 2497. He started to study dharma under the teacher Phra Krub Pu and went with him on Tudong to Laos and Cambodia.  He was ordained as a  Bhikku on 27th October 2522 and was given the monk’s name of  Intawanno. He spent ten years in the forests of Northern Thailand studying sutras and meditation before going to live in seclusion in a cave above the Moonbon dam in Chonburi.

Luang Phor Kruba Krissana, eventually, the locals convinced him to leave his mediations in the cave and to help them build the forest monastery of Wat Pa Matawan.  He helped them dig a pond out of the earth and started to use the earth to fashion a sacred object using the design of two Salika birds facing each other. He later began creating amulets using the same design and created the King Butterfly amulet. This amulet looks like a butterfly but it is made up of two love birds facing each other. The birds represent Lord Shiva and Kali, in a glance of eternal love and a reflection of their eternal love affair. This amulet is called the Thep Jamleng Pamora.

The King Butterfly amulet helps the wearer to achieve aims and grants them wishes. It protects from danger and obstacles. It helps the wearer overcome their enemies and helps get rid of discord. It draws both wealth and business opportunities to the wearer.

Amulets of this type can cost many hundreds of dollars, particularly if they are fashioned with handwritten gold and silver Takrut and precious stones added to the backs of them to increase the magical power of the amulet. In order to spread the teachings of the Buddha dharma under the auspicious guidance of Kruba  Krissana, a number have been made available for ”rent” to people who cannot afford to buy these amulets. The gold and silver Takrut is believed to enhance the magical power of the amulets while the precious stones are said to bring wealth and good relationships.

Luang Phor Kruba Krissana has made clear that no normal precious stones can be worn to attract such blessings but they must be cleaned by someone with the mind power to removed impure energies and then blessed and energized with the positive magical power by him or a Master who has the knowledge and mind power to be able to do it.

The King of Butterfly is an eight-sided amulet which is said to attract luck from the eight directions to the wearer of it. The painting of them is done by Luang Phor Krub Krissana himself with organic paints and inks and he signs each amulet by hand that he makes, after infusing it with its magical and spiritual properties. Imitations and factory-made copies will not have his signature on them. His amulets are made from flower powder, holy powder, and sacred materials. They should have a strong and pleasant smell that lasts a long time.

Luang Phor Kruba Krissana, was famous for the King Butterfly, which has been described, also the Metta Mahinyom power amulet which brings increased business and riches increased chances of promotion and popularity to the wearer. He also produces the Kruba Krissana amulets, the Wat Tumong Kol auspicious temple amulets, and the Krueang Rang occult magic items.

Kruba Krissana uses a different kind of Witcha, or magic which is called the  Montr Terrayan, a power that extends around the universe. He learned it from his teacher Phu Ruesi Bangbod and it is likely that he undertook Buddhist Abisheka, the direct transference of secret knowledge from Master to Student during an empowerment ceremony.  This transfers knowledge and teaching directly and is done through the lineage of the Master.

He studied magic for over 20 years in Cambodia and uses it to embed the spiritual and magical power into the amulets and that he invokes the mind of a Deva to reside in the amulet to give it the power.