Origin of Thai Amulets. Reading these descriptions and examples of white magic will help in a better understanding of Sank Yant Magical art of sacred designs and amulets etc 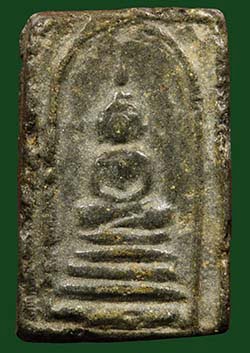 Origin of Thai Amulets. It is hard to establish the exact origins of the creation of Thai amulets,  but  Phramahaboontan Teerankuro from Wat Phra Chetupon has put forward his theory that they were first created when Buddhism began to flourish in Thailand. He suggests they were first fashioned after the style of Greek amulets and icons of deities which were widely distributed under the Greek King Menander’s rule in India.

Some devout Buddhists believe that the true purpose of creating Amulets and Talisman in Thailand should be for people to wear them and remember the blessings that Lord Buddha brings to them each day. It should also be used as a reminder of what to do and what not to do and whether to sin or not sin. Buddhism is founded on the principle of consciousness and being fully awake and aware of things that are going on around you and in your life and your thoughts and reactions to events. Amulets were originally intended to remind you of that.

But it has become popular for monks and white magic practitioners to infuse other blessings into the amulets, such as for good luck, protection, to bring good business to the wearer, and many other varied blessings. The monks believe that Karma plays a big part in whether the amulet will work for you or not, as intended. If we do evil then no amulet can protect us from karma that comes to us. Amulets are mainly for peace of mind, and you should live a good life to get the most out of them.

Often, buying an amulet is referred to as Chao Pra, which literally means borrowing or renting one. It is less offensive in Buddhism to refer to it as borrowing than to refer to it as buying an amulet. It begs the question if you can actually buy blessings or if they are bestowed on you for other reasons. It is often believed that the older the amulet the more power it holds, but that is not always the case. Your intent in using it may make the difference between it working well or not.

Amulets and Talisman can be made in many different ways. They can be made of powders mixed with herbs or oils and pressed into a pre-designed metal plate to make various shapes and sizes of the amulet. These are then baked at high temperatures to make them hard. This style of the amulet can also be made from clay with things added, or even earth from sacred places.

They can be made from metal or a mixture of metal and other ingredients that is smelted down at high temperature then poured into a mold to set. The ingredients of amulets are often kept secret by the monks, depending on the final use of the amulet.

The finished amulet is then blessed and infused with blessings by the monk, or by many monks praying together to bless the amulet with certain powers. Only experienced spell casters are allowed to do this work, although an audience of watchers is sometimes allowed. At the beginning of the ceremony, all people involved must be cleansed to show respect and recognition of previous monks associated with that particular amulet and the spirits that are going to be invoked to bring the blessings to it. It is both a sacred and delicate process and is done with great reverence by all involved. Old metal amulets are often melted down to use in the creation of new amulets and old powder ones are often ground up to be added to newly pressed amulets. This is believed to carry some of the old powerful magic forwards into the new batch of amulets.

Often amulets are inscribed with the maker’s mark of the monk, or temple where they are produced.  Cryptic and sacred signs are often added to the amulets to increase their power and some have gold or precious stones added to the backs of them.

Many amulets found in the rural areas of Thailand are made from natural materials and may be made of wood, stones, leaves, flowers, oils, and even earth and clay. People tend to make use of materials that are readily available in the area where they live. These amulets are no less powerful.