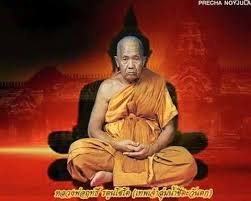 Thai Amulet Monk Luang Phor Rit Radtanachoto was born on Sunday 13th May in Surin. He was ordained at Wat Petchburi when he was 22 years old. He studied at Wat Prasat under the guidance of  Master Bpae, then went to practice at  Wat Plab in Tong Mon. He later moved to Wat Bang Krabang and began Todong (Spiritual journeys) in the forests nearby. He ventured as far as Isan, Laos, and Cambodia in search of greater knowledge of the Dhamma and Magic (Saiyasart). Sometimes he returned to his temple and developed new buildings,  helped by a large number of followers and devotees he had accumulated on his travels.

Luang Phor Rit Radtanachoto In 2535 BE he began to build Wat Chonlapratan in Buriram after receiving a Royal Decree to do so. He has remained there ever since. His amulets raised funds for the construction of the temple, plus a two-story building for accommodating the monks and a building for training them in. He asked that people who received his amulets should pray for his good works at the temple to flourish and continue. If they did this then the amulets would emit a radiant power that would bring them blessings of good luck, attraction to others, and preferential treatment.

Metta Mahiniyorn- to charm others and bring favor and kindness

Luang Phor Rit Radtanachoto is also well known for blessing  sacred water, of which there are two types:

The first is given in a monk’s bowl to the receiver. It is said that he repeats the sacred magical chants thousands of times to produce one bowl of the sacred water. It is reputed to make people charming and very attractive to the opposite sex. The water is made in very limited quantities and is in very high demand.

The second kind of sacred water is stored in huge Temple jars. This sacred water is reputed to dispel evil and ghosts. Crowds come every day to the temple to ask for this water because of its special powers. Luang Phor Rit welcomes the mentally ill and insane to visit him at the temple and to ask for the water from the  Temple Jars. Often the families of the mentally ill, insane and possessed bring the victims to the temple to be seen by him. He is famous for using his high-level good magic to help those afflicted with Black Magic spells or those possessed by demons, ghosts, or spirits.

Luang Phor Rit Radtanachoto is so highly advanced as an adept at magic and the supernatural that he often knows what help the visitors need before they ask him. He once spoke to a group of teens who were waiting to see him and told them he knew they were there for a spell to protect them from serious road accidents. They were amazed as that was what they had come to ask for, but they had told no one.

When Luang Phor Rit was concerned about the slowing of contributions that were coming in for the building of the temple pavilion, he decided to create a new special amulet. He produced an amulet known as ”Rich of money, Rich of Gold”. He said it was the best amulet he had ever produced and that each one was full of miracles and could bring blessings such as true love, luck, success, safety, wealth, and charm to the holder of it. He stated that the ingredients he had used in its creation were unique and incomparable and that holder of them should keep them for themselves only, as they were created especially for his disciples.

One very interesting thing about Luang Phor Rit was that he was one of very few monks who claimed to have met the mysterious Luang Phor Suang.

Luang Phor Suang was a monk who worked with high magic. It was claimed he lived for over five hundred years, most of it spent in the middle of a rice paddy field. He made amulets to bring protection, immortality, and invincibility. He was also known as  Tewada Len Din, the angel who came to earth to play. It was never revealed how Luang Phor Rit had met him, whether it be in life or in spiritual realms.