Phi Ta Khon festival of Spirits. Reading these descriptions and examples of white magic will help in a better understanding of Sank Yant Magical art of sacred designs and amulets, etc 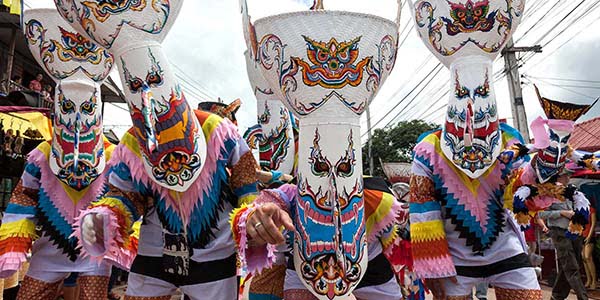 Phi Ta Khon festival of Spirits is also known as Dan Sai festival of Spirits. It is held at Wat Phon Chai for three consecutive days each year. On day one the village shaman dresses all in white and leads the procession of Tiam (Higher spirits). The lower spirits are called Lao Thai Khwan. Groups of lower-level mediums join the ceremony at the Man Ruer river at three o clock in the morning. Rituals are performed to tempt the water spirit known as Phra Upakhut out of the water to join the parade.

Phra Upakhut is said to inhabit a slab of invisible white marble below the water. He is believed to have been a monk who had magical powers, who decided he wanted to live a life of peace and

solitude beneath the water and who has been there ever since. Historically this story may have a link to Upagupta, the Buddhist Bodhisattva who is believed to have gone to live in the ocean in order to find peace and solitude.

They then return to the Wat to eat by seven o clock in the morning. After this break, more spirits are summoned at the village spirit shrine to join the parade with the others. Everyone now at the

ceremony takes part in the Bai Sii sacred cord tying ritual. The head medium goes into a trance and the villagers tie cords around his arms, which are propped up on cushions. Free food and white

alcohol know as lao khao is served to everyone.

Special costumes are brought out of storage in the high altar in the temple and these are worn by the shaman’s attendants. Masks are used to transform them into Phii ta Khon, or Phra Wet spirits.

Two of the attendants wear large bamboo frames around their bodies which are then covered in white material and topped with huge head masks. One is male and one is female, with enlarged

sexual organs attached to the fronts of the bamboo frames. They all go in procession around the Wat with everyone taking part in bawdy acts and dancing.

Phi Ta Khon festival of Spirits. On the second day, the locals don homemade costumes and join the main procession of spirits from the previous day. Many of the participants carry huge wooden phalluses, waving them around and using them as a lucky talisman. On reaching the Wat they all circle the temple, accompanied by live music and performing dances and lewd actions with the wooden phalluses. This goes on for many hours and the event is ended with bamboo rockets filled with explosive mixtures being set off. Many of them go astray and chaos ensues as they often fly into the crowd.

The third day is much more of a solemn affair. Everyone assembles at the temple and they listen to Dhamma sermons. There are often as many as thirteen sermons delivered by the Abbot of the

temple. Then blessings are given to the participants and the masks and costumes are stowed away until the following year.