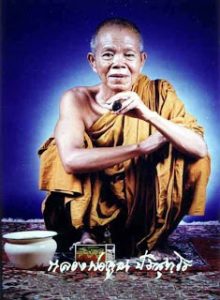 Thai Buddha Amulet Monk Luang Phor Koon Paritsuttho Sacred Thai Amulets – 20 Amazing Monks is one of the most famous and respected guru monks in Thailand. He had many devotees and was especially famous for the chanting of mystical incantations and the magical (Visha) insertion of Takruts into the arms of devotees. Takruts are small scroll amulets used for protection from accidents, the realization of Metta (Kindness), and the powerful protection they gave which is known as Kong Grapan, immunity to injuries from weapons. We do not believe that Grapan will protect you from weapons but help you to stay away from them.

Luang Phor Koon was born in a small village named Ban Rai in Nakhon Ratchasima province, which is also known as Korat. Born on 4th October 1923, he was the eldest son who later had two sisters. He was cared for by his two aunts following the death of his mother when he was eleven. Upon his father’s rapid remarriage, he was sent to Wat Ban Rai, where he studied Buddhism and cleaned the temple in the evenings, after spending his days helping his father with farm work.

During the summer observation break, he learned meditation and furthered his Buddhist studies under Master Luang Phor Daeng at Wat Nongpho. He proved to be exceptionally intelligent studying under L P Daeng, covering subjects including Dhamma (the study of Buddhism,) Samadhi (Mindfulness), and Wichah (Magic). Eventually, L P Daeng told him that he had successfully studied all the subjects and it was time for him to find another Master. L P Daeng introduced him to a high ranking monk called Luang Phor Kang, who immediately recognized the potential of L P Koon and accepted him as his disciple.

The promising disciple applied himself to furthering his Buddhist studies and cultivating his spiritual and magical powers. He was encouraged to climb mountains and enter the forests to practice in remote places. After three years he left this Master and decided he wished to fulfill the compassionate element of Buddhism and help the needy, who already held him in high esteem and treated him with the utmost respect.

Later, L P Koon made friends with L P Kong and began to accompany him on his spiritual journeys, known as Thudongs. As well as continuing his studies of the Dhamma and Samadhi, L P Kong also taught L P Koon how to perform the incantations and how to insert the Takrut, the magical amulets that give protection and other blessings.

Eventually, L P Koon went on Thundong (spiritual journey) alone to Cambodia, Laos, and other areas in the North East, staying alone in the forests for many years. During the rainy season, when monks traditionally withdraw from the world and stay indoors, he would stay in the forest if he was already in that area, if not he would travel to any of the temples close to the town of Khow Pansal.

After many years of seclusion and spiritual journeying, he decided to return to his village to see his grandmother. She told him that the temple in the village was run down and that the monks had nowhere suitable to chant prayers. She suggested that he develop and build a temple in their own village and taking her pleas to heart he promised to construct the village temple.

Once word spread that he was constructing the temple, many devotees came to help and to give donations towards the new temple and his work. He began casting amulets as gifts to give to thank the devotees for their help and donations. For almost twenty years he gave the amulets away and took to chanting magical incantations and inserting the Takrut (amulets) into the arms of devotees to offer them protection or blessings.

L P Koon died at the age of 91 on 16th May 2015, but he had been replaced many years earlier by one of his closest disciples after he had passed on the sacred arts of using Takrut amulets and incantations to bring blessings and protection to the wearer.