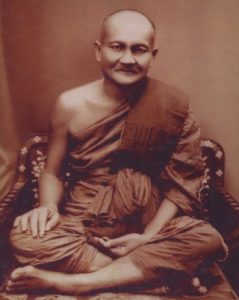 Thai Buddha Amulet Monk Luang Phor Parn Suantoe, also known as Pra Kroo, Wiharagijianugard, was born in 1875. He was named Parn because of a recognized mark of Buddhism; a red birthmark on the left-hand little finger.

He stayed at Wat Bang Pla Hmor after being ordained as a monk. He studied Grammatan and Vipassana along with Buddhist magic. He was taught by L P Sun and became an Adept very quickly and began curing illness and pain and healing people who were under the influence of black magic spells. It is said that everyone who went to him for healing was cured without exception. Ajarn Jeen from Wat Jao Jed was in charge of teaching him Pali and Sanskrit and Bariyadti Dhamma. He then went on to Wat Sragaed until the completion of Abhidharma five years later. He received extra training in  Traditional Buddhist medicine at Wat Sangwaes and extra training in Grammatan from Luang Por Niyam at Wat Noy. While he was forest training he learned how to make clay magical amulets using six images from Chi Ba Khaw. These were very powerful magical amulets which are much sought after by collectors now.

After training, he began the school for Pali, Sanskrit, and Dharma at  Wat Bang Nom Kho. He assisted in the building of up to forty temples around Thailand and helped in the building of numerous other shrines. He undertook Tudong (spiritual journeys) as far as Burma. He experienced many strange visions and had encounters with magical phenomena on the journeys and later published a nine-hundred-page book called The Tudong Tales of Luang Por Parn.

Luang Phor Parn Suantoe was said to have a gentle appearance, voice, and manner and had a compassionate half-smile on his face all the time. He treated all persons the same, no matter what walk of life they came from. If a bad person met him, they changed their attitude and ways. He was very caring towards his parents. When he was Abbot of Wat Bang Nom, he moved his parents to the temple and cared for them himself. He taught the locals meditation and Buddha’s teachings. He rebuilt the temple out of love and devotion and raised the money from his disciples and sales of the magical amulets.

Luang Phor Parn Suantoe is most renowned for the magic he infused into the Yant Gao Petch, the Diamond Armour yantra spell. He learned this magic from a lay practitioner and specialist in Buddhist magic called Ajarn Jaeng. The Yant Gao Petch is reputed to bring invincibility as well as good luck, prosperity, good Karma, wealth, and protection against danger. His Rich Kata was reputed to make the wearer immensely wealthy if chanted regularly and with devotion.

Countless records exist the amulets warding off danger. They were often used to infuse water with healing qualities. This was known as Nam Moo or prayer water. His amulets usually depict the Buddha sitting on a Hanuman, Garuda Porcupine, Cockerel, Bird, or Fish. He told students that he blessed each amulet for three months because if they had been blessed for three years by him the Garuda and bird would be able to fly out of them.

A Chinese newspaper actually reported a story that CCTV had recorded a bird flying out of one of the amulets in a shop. It reported that the bird flew around the shop then back into the drawer where the amulet had been kept.  His amulets are very popular with collectors due to the numerous spiritual and magical phenomena that have happened around them.

It was said that he was very well respected and acknowledged that he had achieved the Great six knowledge of Miracles. These included precognition, out-of-body experiences, mind-clearing, and the ability to perform great feats of paranormal phenomena. In 1932 he told his students the exact time and date that he would die. He got them exactly right as predicted. After death his body remained intact, refusing to decompose. His two teachers had achieved the same state before him. Buddhists believe that lack of decomposition shows the highest level of spiritual attainment, where the knowledge of mind-clearing used at death stopped reincarnation and cleansed the Astral body. In this supreme state, the cells of the body were reputed to change to crystals and the cells become immortal and prevent decomposition. He is still one of the most famous Guru monks in Thailand.

Our Sak Yant Thai Tattoo Masters have done there time as deciples and trained for many years. They are fully qualified Sak Yant masters and trained by Grand Masters. Our masters are certified by the Thai goverment as genuine masters.