Golden needles and Ruesi Mask. Reading these descriptions and examples of white magic will help in a better understanding of Sank Yant Magical art of sacred designs and amulets, etc. 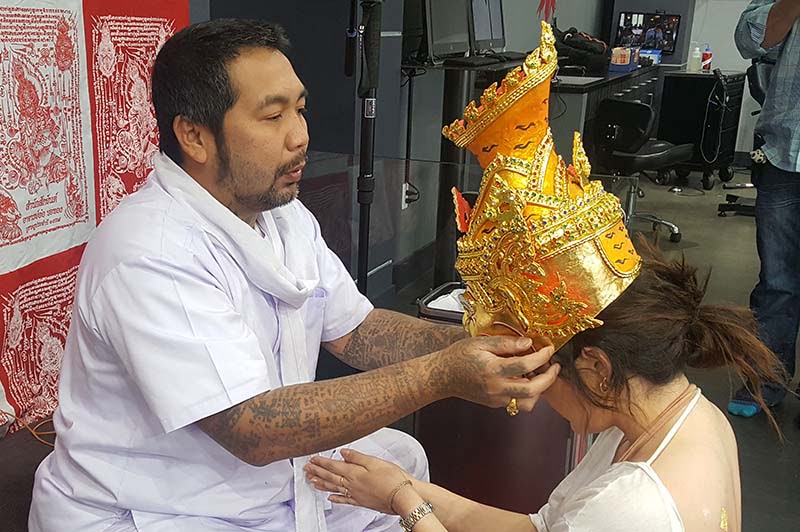 It was a very hot morning when we set off to the temple for the Golden needles and Ruesi mask blessings ceremony, also known as the Wai Kru. The humidity was off the scale and we were all glad of the air conditioning in the minibus. I was with the team from Bangkok-ink.com, and members of the tattoo-school-thailand.com team.

The Wai Kru and Golden needles and Ruesi mask is a special Buddhist ceremony where respect is shown to teachers and Masters. In this case, it was an opportunity for the wearers of sacred traditional Sak Yant tattoos to go and have them re-blessed/energized. Some people go every year to have the energy and power within the tattoos refreshed. In Asia, the tattoos are worn to give various blessings and forms of protection from the difficulties you may encounter in everyday life, such as ill-health, danger, or lack of love. On this particular day, there were three different blessings being given. The first was by a monk who painted Yantra symbols on the palms of the hands, one who used the Ruesi mask to bestow the blessing, and a third blessing which was only available to men, which was the insertion of a lucky gold needle under the skin of the chest. The tradition of putting the lucky needles under the skin has long been a tradition in Thailand. It is very popular with Muay Thai kickboxing fighters as they are not allowed to wear metal amulets and are unable to carry anything into the ring. They do wear ceremonial headdresses but these must be removed before the fight begins. To wear a metal needle inside the skin is a clever solution to wanting to benefit from the blessings of it.

As we arrived to get our Golden needles and Ruesi mask blessing at the temple, we came across a large bridge at the entrance to the temple. People were standing on the bridge feeding fish pellets to the massive fish in the river. Murky looking the water maybe, but it is teeming with tens of thousands of healthy river fish, from the freakishly big catfish to the turtles and eels which thrive in its nutrient-rich water.

Having crossed the bridge, we entered the courtyard of the temple. There were stalls on either side of the path selling everything you might need for a temple visit, from handmade flower offerings to sweets made from rice flour and egg yolk. My inner photographer thrilled at the cloudburst of colors in the temple. This was going to be fun! An ancient Thai monk was already installed on a raised platform, ochre-colored robes draped around his body, microphone in hand, ready to chant to the people going past him. I smiled and showed respect, but doubted he could see me with his rheumy old eyes. It didn’t matter, my respect would be felt anyway.

We removed our shoes and went up the marble steps to the main event. Stunning Images of the Buddha were at the back of the platform, surrounded by fresh flowers in every hue on earth. The main monk was seated at the front, texting on his mobile phone in one hand and eating spiced nuts with the other. The master of ceremonies monk had his microphone ready for the opening prayer and the lay people were ready to control the crowd.

The announcement was made for people to come forward and receive their Golden needles and Ruesi mask blessing. They made three

orderly lines in front of the main monk. Each person was holding a plate of offerings, usually flowers, incense, and fruit in the first two lines. The third line was making small offerings of money to the temple which was placed in a basket in front of the third monk.

The first line was the main line. The men in it removed their shirts to display the Sak Yant tattoos they were covered with. This line was for men only as it was the line to get a gold needle inserted into the skin of the chest to bring good luck and protection. The first man came forward and showed respect to the monk and presented his offering plate. The monk took the plate and began to make magic symbols with his finger on the face and around the eyes of his disciple. I noticed the monk was pressing lightly on the shiatsu points above the eyes and on the forehead where the third eye is reputed to be.

The monk then proceeded to insert the pin into the upper chest. The person receiving the pin showed no sign of pain or distress. Indeed, they looked calm and at peace while it was done and slightly stunned when the process was finished. The gold needles were kept in an ornate dish the monk had by his side ready. They were about the size of a pin from a watch strap, but thicker.

The second queue was for men, women, or children to receive the blessing from the monk holding the Ruesi mask.

The person would sit in position in front of the monk and make their offering. The monk would then chant the magical mantras and hold the Ruesi mask over the head of the recipient before placing it over the head. One child in the ritual protested and everyone laughed. Laughter and fun are never far away here in Thailand. Even the proceedings at an important ceremony such as this are never taken too seriously while people are taking part, even though it is a very important event in their life.

Some of the adults began to shake when the Ruesi mask was placed close to them during the ritual. There is always a chance that the person may shake vigorously or even go into a trance due to the strong power exuded by the masks and the blessing. But the laypeople are ever-present to help coax you gently back to the present and you are in very safe hands. They are the experts in such matters, as are the monks. The third queue is the one I decided to join. The people wait, patiently smiling at me, for their turn. It is my turn and I put my small donation in the basket and the person collecting it Wai’s and shows respect in return to mine.

I look at the monk and he has a kind and peaceful face. He draws an ancient symbol on my forehead and chants a blessing, I can’t help but smile at him and return the kindness and compassion.  Then he shows me to hold my hands open in front of him, shaped like a cup to receive the next blessings. He draws magical symbols on both my hands in what feels like thick white chalI look at him and the lay helper as I feel an enormous rush of energy go through my body. What began as a small vibration in my hands when he drew the symbol, has now become a flood of positive energy through my whole body. I hope I am not going to go into a trance. I don’t, but the energizing effect persists and my hands shake all afternoon, long after the event is over. After receiving the Golden needles and Ruesi mask blessing etc.
We leave in the late afternoon and the queues are still the same size as when we arrived. These Wai Kru events take place throughout the year, depending on the Master and the Temple. Some are timed to take place on days of the full moon, which are important days here in Thailand. The size of the audience varies, from a few hundred devotees to tens of thousands at the most popular temples with the famous Masters of Sak Yant. I am looking forward to the next one. Watch this space.